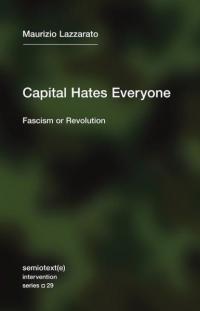 Capital Hates Everyone: Fascism or Revolution

Why we must reject the illusory consolations of technology and choose revolution over fascism.

We are living in apocalyptic times. In Capital Hates Everyone, famed sociologist Maurice Lazzarato points to a stark choice emerging from the magma of today’s world events: fascism or revolution. Fascism now drives the course of democracies as they grow less and less liberal and increasingly subject to the law of capital. Since the 1970s, Lazzarato writes, capital has entered a logic of war. It has become, by the power conferred on it by financialization, a political force intent on destruction. Lazzarato urges us to reject the illusory consolations of a technology-abetted “new” kind of capitalism and choose revolution over fascism.

Log in to get emails when Maurizio Lazzarato has something new.