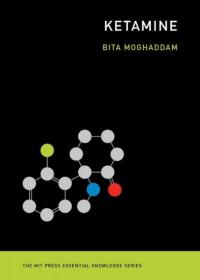 The emergence of ketamine, previously known as a combat anesthetic and club drug, as a treatment for depression. Ketamine, approved in 2019 by the Food and Drug Administration for the treatment of depression, has been touted by scientists and media reports as something approaching a miracle cure. This volume in the MIT Press Essential Knowledge series chronicles the ascent of a drug that has been around for fifty years, in previous incarnations, a Vietnam-era combat anesthetic and a popular club drug, that has now been reinvented as a treatment for depression. Bita Moghaddam, a leading researcher in neuropharmacology, explains the scientific history and the biology of ketamine, its clinical use, and its recently discovered antidepressant effects, for the nonspecialist reader.

Log in to get emails when Bita Moghaddam has something new.