Home / Store / Books / Billionaires: The Lives of the Rich and Powerful 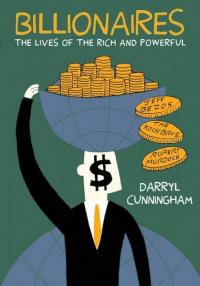 Billionaires: The Lives of the Rich and Powerful

An informative and funny deconstruction of how the giants of American capitalism shape our world.

In Billionaires: The Lives of the Rich and Powerful, Darryl Cunningham offers an illuminating analysis of the origins and ideological evolutions of four key players in the American private sector, Amazon founder and CEO Jeff Bezos, media mogul Rupert Murdoch, and oil and gas tycoons Charles and David Koch. What emerges is a vital critique of American capitalism and the power these individuals have to assert a corrupting influence on policy-making, political campaigns, and society writ large.

Cunningham focuses on a central question: Can the world afford to have a tiny global elite squander resources and hold unprecedented political influence over the rest of us? The answer is detailed through hearty research, common sense reasoning, and astute comedic timing. Billionaires reveals how the fetishized free market operates in direct opposition with the health of our planet and needs of the most vulnerable -- how Murdoch’s media mergers facilitated his war-mongering, how Amazon’s litigiousness and predatory acquisitions made them “The Everything Store,” and how the Kochs’ father’s refineries literally fueled Nazi Germany.

In criticizing the uncontrolled reach of power by Rupert Murdoch (in fueling the far right), the Koch Brothers (in advocating for climate change denial), and Jeff Bezos (in creating unsafe working conditions), Cunningham speaks truth to power. Billionaires ends by suggesting alternatives for a safer and more just society.

Log in to get emails when Darryl Cunningham has something new.