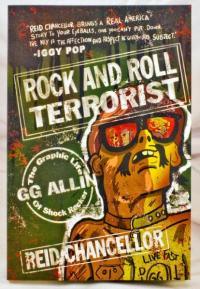 A glimpse of the man behind the spectacle. Born as Jesus Christ Allin and raised in rural isolation by a violently abusive religious fanatic, GG Allin grew up to be one of punk's most controversial figures. His music was overshadowed by his on-stage antics, including throwing blood and feces at the audience and hurting himself and audience members. In this first substantial biography of the man who wanted to make rock "dangerous" again, Hardcore Anxiety author and illustrator Reid Chancellor portrays Allin's life and early death with sensitivity, asking us to look beyond the shocking spectacle to understand the troubled human behind the scenes, and the societal forces that pushed him to the edge of creative expression.

Log in to get emails when Reid Chancellor has something new.

There and Black Again

by Don Letts and Mal Peachey