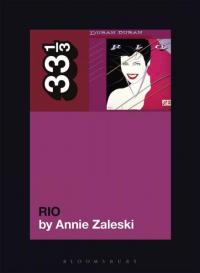 In the '80s, the Birmingham, England, band Duran Duran became closely associated with new wave, an idiosyncratic genre that dominated the decade's music and culture. No album represented this rip-it-up-and-start-again movement better than the act's breakthrough 1982 LP, Rio. A cohesive album with a retro-futuristic sound, influences include danceable disco, tangy funk, swaggering glam, and Roxy Music's art-rock, the full-length sold millions and spawned smashes such as "Hungry Like the Wolf" and the title track.

However, Rio wasn't a success everywhere at first; in fact, the LP had to be buffed-up with remixes and reissued before it found an audience in America. The album was further buoyed by colorful music videos, which established Duran Duran as leaders of an MTV-driven second British Invasion, and the group's cutting-edge visual aesthetic. Via extensive new interviews with band members and other figures who helped Rio succeed, this book explores how and why Rio became a landmark pop-rock album, and examines how the LP was both a musical inspiration, and a reflection of a musical, cultural, and technology zeitgeist.

Log in to get emails when Annie Zaleski has something new.