Home / Store / Books / UFOs and the Deep State: A History of the Military and Shadow Government's War Against the Truth 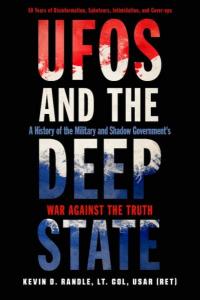 UFOs and the Deep State: A History of the Military and Shadow Government's War Against the Truth

A deep dive into UFO cover-ups by the deep state. A wake-up call to what has and is being hidden.

“The leading proponent of the theory that the US government knows more than it’s saying about UFOs.” -Globe and Mail (Toronto)

The deep state exists without a doubt and it has perpetrated a consistent mission to hide, obscure, and delete information as it pertains to UFOs and alien interactions. Should unelected officials be making the decisions on disclosure? Has a secret space program been developing technologies not of this world for decades? What have the U.S. Air Force and other agencies been hiding? This and more is explored in UFOs and the Deep State.

UFOs and the Deep State will touch upon:

Project Moon Dust, run by the Air Force and Department of State

An examination of the Secret Space Program and other black projects

Author Kevin D. Randle connects the dots at last to reveal the overlooked, including how the deep state conducted interrogations that involved various techniques using chemicals and other mind-altering techniques.

The evidence is clear. The unelected officials in the deep state have been obscuring UFO incidents and intimidating those who wish to speak out. Let the truth rein free!

Log in to get emails when Kevin D. Randle has something new.