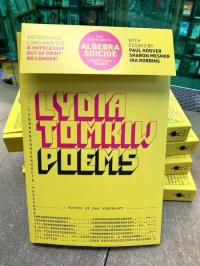 In the late seventies, Lydia Tomkiw, a precocious, inventive poet and a beguiling new wave chanteuse, blazed out from Chicago's intertwined worlds of poetry and punk rock. Her trajectory stands as a thrilling testament to the independent do-it-yourself ethos -- that the journey from Chicago's Ukrainian Village to the inaugural volume of Best American Poetry can be made via nightclubs, armed with little more than restless imagination, words, office xerox machines, and moxie.

With her acclaimed band Algebra Suicide -- designed explicitly as a vehicle for her poetry -- Tomkiw pushed the boundaries of poetic performance, while also leaving behind a series of unassailably ace records.

• Edited & designed by Dan Shepelavy, this new collection presents all of her publications in facsimile editions, preserving the raw sizzle of her early self-published chapbooks as well as comprehensively reissuing the works that secured her reputation.

• In addition, it gathers together more than 180 uncollected poems, accounting for all her Algebra Suicide releases as well as Incorporated, her final solo work.

• The book includes a comprehensive and fully-researched biography that finally provides a considered portrait of Tomkiw and details her activities and considerable achievements as a musician and poet.

• It features an introduction by poet and Tomkiw's teacher Paul Hoover, a recollection by poet and close friend Sharon Mesmer, and a consideration of Algebra Suicide by music critic/Trouser Press editor Ira Robbins.

• In partnership with Dark Entries Records, each book also includes a download of Algebra Suicide's 1986 debut album Big Skin - significantly the only time a book and record were released simultaneously, with the same poems, in the same order.

LYDIA TOMKIW POEMS restores to print and posterity an exhilarating and important voice in American poetry.