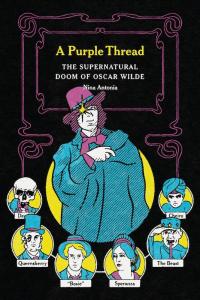 by Nathaniel Winter-Hébert and Nina Antonia

Even before his birth, the life of Oscar Wilde was one shaped by dark, otherworldly forces. From a childhood spent in the fabled lands of Tír na n?"g to his star-crossed romance with Lord Alfred Douglas, Wilde’s trajectory through the artistic and social worlds of his day seemed guided by strange fate, some of it prophesied in his most famous works, including Salomé and The Picture of Dorian Gray.

In this focused biographical account, author Nina Antonia examines the florid tapestry of the playwright’s tragic ascent and fall, revealing, as Wilde himself called it, “the note of doom that like a purple thread” ran through, and eventually cut short, the life of one of literature’s most celebrated and scandalous icons.

Nina Antonia’s other works include the novel The Greenwood Faun (Egaeus Press, 2017) and the collection Incurable (Strange Attractor Press, 2018), both of which explore the lives and works of Decadent-era poets.

A Purple Thread is designed and illustrated by Nathaniel Winter-Hébert, a Canadian artist whose work is familiar to readers of the British zines Hellebore and The Ghastling.

”An elegant prose meditation on the sense of the fateful in Oscar Wilde’s life and work.” -Mark Valentine, Wormwoodiana