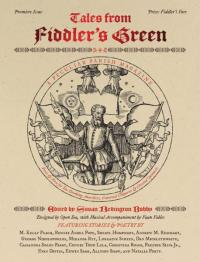 Our first collection of prose and verse, with an introduction by series editor Susan Redington Bobby and a foreword from Clint Marsh. Published in spring 2021 by Fiddler’s Green.

Tales from Fiddler’s Green 1 features red foil titling, illustrations throughout by Open Sea Design Co., and 72 pages of short fiction and poetry, including the following:

For Christiana: Write While You May, by M. Kelly Peach

The Whisker Reliquary, by Sheryl Humphrey

Memoirs of a One-Time Dragon Slayer’s Apprentice, by George Nikolopoulos

The Gate and the Key, by Miranda Rey

The Forest Bride, by Lorraine Schein

If a Tree Falls, by Dan Micklethwaite

Two Stones: A Tale from the Medieval Bestiary, by Evan Davies

Down by the Sea, by Natalia Forty

For Ariana: Dance While You May, by M. Kelly Peach

by Gerhard and Clint Marsh

Nine Defenses Against the Basilisk

by Alexis Berger and Clint Marsh

Our Bogeys, Our Shelves: The Magician's Library as Mentor, Companion and Oracle

by Jeff Hoke and Clint Marsh

by Clint Marsh and Timothy Renner

Riddle of the Sphinx

by Clint Marsh and Adrienne Rozzi