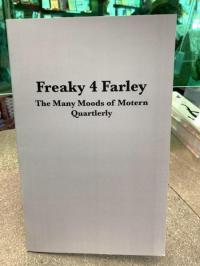 Leor says: The first quarterly zine documenting my yearlong quest to listen to Matt Farley's 22,000-song (and counting) catalog, one album at a time. Issue one unpacks Farley's first 77 albums in a series of diaristic notes, with an introductory essay for those new to the world of Matt Farley. 32 pages, 15,000-plus words, probably more spelling and grammar errors than I could catch (including the one on the cover).

Log in to get emails when Leor Galil has something new.