Home / Store / Books / Punks in Peoria: Making a Scene in the American Heartland 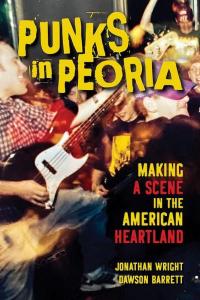 Punks in Peoria: Making a Scene in the American Heartland

by Dawson Barrett and Jonathan Wright

Published by University of Illinois Press

Synonymous with American mediocrity, Peoria was fertile ground for the boredom, and anger, fueled fury of punk rock. Jonathan Wright and Dawson Barrett explore the do-it-yourself scene built by Peoria punks, performers, and scenesters in the 1980s and 1990s. From fanzines to indie record shops to renting the VFW hall for an all-ages show, Peoria's punk culture reflected the movement elsewhere, but the city's conservatism and industrial decline offered a richer-than-usual target environment for rebellion. Eyewitness accounts take readers into hangouts and long-lost venues, while interviews with the people who were there trace the ever-changing scene and varied fortunes of local legends like Caustic Defiance, Dollface, and Planes Mistaken for Stars. What emerges is a sympathetic portrait of a youth culture in search of entertainment but just as hungry for community, the shared sense of otherness that, even for one night only, could unite outsiders and discontents under the banner of music.

A raucous look at a small-city underground, Punks in Peoria takes readers off the beaten track to reveal the punk rock life as lived in Anytown, U.S.A.

Libraries I Have Known