Home / Store / Books / It's Not What You Thought It Would Be 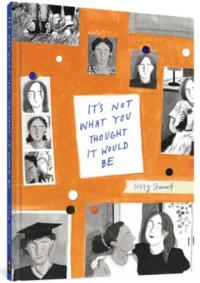 It's Not What You Thought It Would Be

A young girl imagines a grand future for herself, far from the drab British suburbs. Two friends, once inseparable, find their connection gradually slipping away. Three women discuss how life in the big city makes them feel seen -- or invisible. In a series of interconnected vignettes, It’s Not What You Thought It Would Be explores the circuitous paths lives can take and the changes in perspective gained along the way.

In a series of interconnected vignettes, Stewart focuses on the ordinary, slice-of-life moments -- teenagers climbing up and lounging on a rooftop, friends catching up over pints at the pub, a woman riding the night bus home -- and charges these scenes with a quiet intensity. Through keen observation and an ear for naturalistic dialogue, she reveals the complex natures of her characters, from their confidence to their insecurities, as they experience the joys and pains of growing up. Drawn in a variety of different styles, from watercolor to colored pencil to pen and ink, the style of this book echoes the evolution of the characters within.

Log in to get emails when Lizzy Stewart has something new.