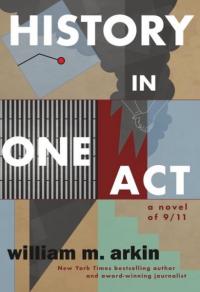 History in One Act presents a fresh retelling of 9/11 that shocks readers into two worlds: one of al Qaeda as it moves forward, and one of American espionage, which shows the U.S. seeking to achieve its own holy grail of national security.

With this book, we get insight into the still-unanswered question: who were the men behind 9/11? Heart pumping and intimate, History is a never-before-told tale of masterminds, spies, pilots, presidents, and princes. A debut novel from national security expert, bestselling author, and award-winning journalist William Arkin.

It's a fresh retelling of 9/11, filled with revelation and insight that will shock readers into the world of al Qaeda as it grows in strength and moves forward to undertake its world-changing attacks. And it infiltrates the secret domain of American intelligence, which has its own plans, seeking to use what is coming as the means to achieve its own holy grail of national security.

We all know how it ends, but as lives meet and events unfold, we come to understand that 9/11 was neither the beginning nor the end, that everyone has a reason for what they do, that individuals do matter, and, indeed, that history can be created in one act. Arkin answers questions nobody seems to be asking, even 20 years later: Why did it happen? Who were these people? Can we ever hope to defeat terrorism if we don’t understand those who wish us harm?

In this unique work of “friction” (fully footnoted and based on original documents), an alternate record of true history is presented, not just peering into the minds of those involved, but into our own world, one that challenges our views of the administrations of Bill Clinton and George W. Bush, and the events of that momentous day.

Arkin’s formidable career, as Army intelligence analyst, as human rights scholar, as military consultant, and finally as journalist, uniquely equips him to bridge two very different worlds. His expert telling shows how individuals can now wage war, where disruption comes from small groups rather than organized governments, and where nobody's hands are clean. He forces the reader to grapple with a new understanding for why this world-changing attack happened in the first place, and how our indifference to the human strivings and grievances of the perpetrators made us blind then and makes us blind today.

Log in to get emails when William M. Arkin has something new.