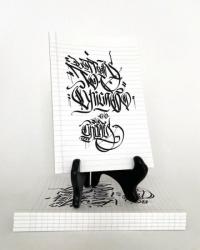 After the limited hand-made first edition sold through a couple months back, we decided to print a more versatile second edition to keep this book alive and circulating. Generally, it is the same content but in a smaller format with a couple artwork updates. The digital printing allowed us to reproduce the lettering colors as Sir Charles originally conceived, and to make the book available at less than half the original price. This version is also available for wholesale purchasing to achieve a wider distribution.

Sir Charles is a pseudonym born from the gang violence that began to plague not only the streets in his own neighborhood of Brighton Park, but also many other neighborhoods in Chicago. A drive-by shooting that occurred in 2015 at Shields Elementary School fueled his mission to combine Chicago gang lettering and culture with a personal twist of empowerment, forgiveness, and growth. This mission simultaneously documents personal struggles and battles with alcoholism and drug abuse as Sir Charles, or Life of a Busy Dad as he’s also known, started a new chapter as a sober father for his daughter that continues to this day. In this publication Sir Charles’s letters are paired with mid 20th century photographs from the archives of Chicago’s Urban Renewal Department. Documenting the process of identifying “blighted” buildings/neighborhoods, and targeting them for destruction/replacement, these photos preserve images of bygone structures in the oldest parts of the city. This initiative displaced many from their homes for the sake of municipal infrastructure projects, a new university campus, public housing, and private real estate developments. With a mind to contemporary parallels, Sir Charles’s letters, symbols, and messages float through this history as a disembodied voice while demonstrating a new lettering mode combining calligraphy with graffiti handstyles that is both deeply indebted to, and an integral product of, his native city of Chicago.

Log in to get emails when Sir Charles has something new.