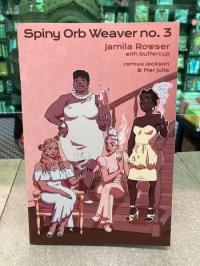 The publisher, Radiator Comics, says: "Spiny Orb Weaver is a comic arts journal, edited by Neil Brideau, that investigates the cartooning scene in South Florida! In each issue, a local cartoonist is commissioned to draw a new 12-page comic. Following the comic, Neil interviews the cartoonist. Back-pages are devoted to comics and essays by people who have lived in South Florida, but now live elsewhere.

Jamila Rowser writes and buttercup draws the story of messy gods trying and failing to reform their image in the eyes of mortals. What did going on the reality TV show, Real Realm do for four elemental sisters or their human subjects?

In the back-pages, former Palm Beach County residents and current cartoonists, remus jackson and Mar Julia talk about how growing up in South Florida has left its fingerprints on their work. How does nostalgia play into their storytelling?"