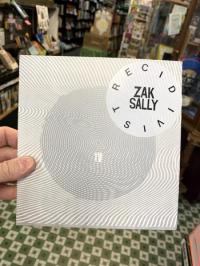 Add to Bag
“You are faced with the reality of quitting or doubling down. Guess which one this is.” -Zak Sally, Recidivist

A man searches for his lost teeth to complete his masterwork. Another embraces ghosts in an act of vengeance. Children escape from a ruined house to find a revelation. A wanderer leaves everything behind and discovers the infinite. Part resignation letter, part manifesto, the stories in Zak Sally’s Recidivist IV comprise a medium-defying visual experience of the freedom in obscurity.

Zak Sally is a cartoonist, printmaker, publisher, musician and educator. He self-published his first comic zine on a photocopier at the age of thirteen. He is best known for his book, Like a Dog (Fantagraphics), and his two comics series, Sammy the Mouse and Recidivist, the third volume of which received two Eisner Award nominations. In addition to his comics work, he played bass in the minimal rock band, Low. He is a native of Duluth, Minnesota, and currently owns and operates his own press, La Mano 21, in Minneapolis. La Mano serves as a publisher for Sally's works as well as those of other comic artists including John Porcellino (From Lone Mountain) and William Schaff. Sally has designed and drawn record covers, posters, zines, illustrations, and comics on an international platform for over twenty years. He has also curated gallery exhibitions, served as the United States liaison to the PFC (an international experimental comics residency/think tank based in France), formed an experimental art school (Schoolhaus, with Dan Ibarra), and is one of the eight organizers, board members, and founders of AUTOPTIC, a bi-yearly festival of independent culture in Minneapolis. Sally has been teaching at the Minneapolis College of Art and Design since 2007. His current ongoing projects include the completion of Sammy the Mouse and a comics biography of author Philip K. Dick.

Log in to get emails when Zak Sally has something new.