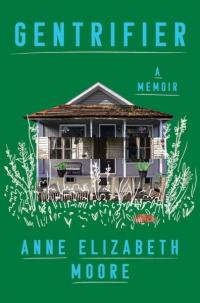 Taking on the thorny ethics of owning and selling property as a white woman in a majority Black city and a majority Bangladeshi neighborhood with both intelligence and humor, this memoir brings a new perspective to a Detroit that finds itself perpetually on the brink of revitalization.In 2016, a Detroit arts organization grants writer and artist Anne Elizabeth Moore a free house, a room of her own, à la Virginia Woolf, in Detroit’s majority-Bangladeshi “Banglatown.” Accompanied by her cats, Moore moves to the bungalow in her new city where she gardens, befriends the neighborhood youth, and grows to intimately understand civic collapse and community solidarity. When the troubled history of her prize house comes to light, Moore finds her life destabilized by the aftershocks of the housing crisis and governmental corruption.

This is also a memoir of art, gender, work, and survival. Moore writes into the gaps of Woolf’s declaration that “a woman must have money and a room of one’s own if she is to write”; what if this woman were queer and living with chronic illness, as Moore is, or a South Asian immigrant, like Moore’s neighbors? And what if her primary coping mechanism was jokes?

Part investigation, part comedy of a vexing city, and part love letter to girlhood, Gentrifier examines capitalism, property ownership, and whiteness, asking if we can ever really win when violence and profit are inextricably linked with victory.