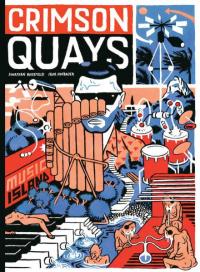 by Jonathan Bousfield and Igor Hofbauer

Before the beekeeper arrived, the Crimson Quays was just a well-appointed tourist trap: a luxury travel resort replete with swimming pools, musical performances, and amusement park rides. However, the resort’s crowning glory, the very feature that drew the beekeeper to the island in the first place, was the zoo.

Although the beekeeper, a biologist by trade, was tasked with the construction of the zoo, he was rarely spotted at resort events. Instead, he spent his evenings chasing other zoological pursuits??"specifically, he was attempting to crossbreed a new species of wolf that would thrive in the resort’s arid climate. The beekeeper’s odd behaviour went mostly unnoticed… until the night the animals got out.

About Igor Hofbauer: Igor Hofbauer was born in 1974 in Novi Zagreb (Croatia), where he still lives and works. He attended the local Academy of Fine Arts for three years. He illustrated several books by the Croatian novelist Edo Popovic, and has contributed illustrations and comic strips to international magazines and anthologies. In 2007, he published his first collection of graphic novellas, Prison Stories for Otompotm Editions in Zagreb. This was followed by Firma, a volume of sketches for Turbo Comix (2010), and Grumizna Laguna (2015), which was published in installments in the Croatian weekly Globus before being issued in book form by URK/Mocvara in 2019. Grimizna Laguna is now available as Sponde Cremisi in Italian and as Crimson Quays in English, both published by Tabularasa Edizioni in collaboration with Bisso Edizioni and Teke Gallery.

About Jonathan Bousfield: Jonathan Bousfield is an English writer living in Zagreb, Croatia. He has written extensively on travel, culture and the history of Central and Eastern Europe, and is the author of guidebooks to Croatia, Poland, Bulgaria, Slovenia and the Baltic States.