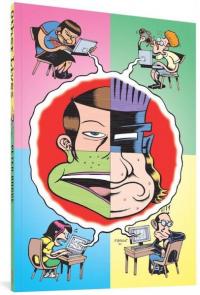 A darkly satirical graphic novel exploration, as only Hate comics creator Peter Bagge is capable of, of how people's identities, both real and created, become confused and conflated.

Other Lives follows three former college classmates: a self-loathing journalist whose family secret is the least of his problems; his girlfriend, whose obsession with getting married borders on Bridezilla status; a conspiracy theorist who may or may not work for the Homeland Security but definitely lives with his mother; and a divorced, unemployed gaming addict who lives in his car. While it's their past that unites them, it's their fabricated online identities, some more dangerous than others, that lead to their "real" lives colliding years later.

Originally published in 2010 by DC Comics' Vertigo imprint, Other Lives is Bagge's first post-Hate original graphic novel and has been out of print for several years.

Log in to get emails when Peter Bagge has something new.

by Quimby's Bookstore and Plastic Crimewave