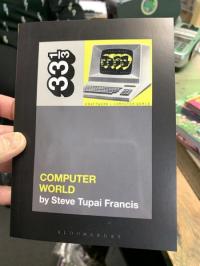 Computer World was Kraftwerk’s most concise and focused conceptual statement, their most influential record and crowning achievement. Computer World transformed the way pop music was composed, played, packaged and released and, in the process, helped create entire new genres of music including hip-hop, techno, trance, electro, industrial and synth-pop. They influenced the influencers.

Upon its release on 10 May 1981, the record was a revelation. It was unlike anything created for mainstream consumers of music at that time, an electronic suite of assured and industrious propulsive forward movement. Kraftwerk set off a sonic detonation that is still being felt today.

This book explores Kraftwerk’s revolutionary sonic template, their conceptual and artistic preoccupations and lyrical obsessions to provide new insights into one of the greatest records ever made.

Log in to get emails when Steve Tupai Francis has something new.