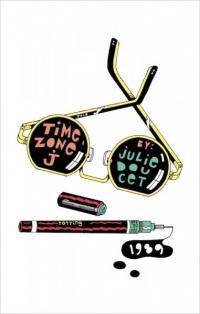 A wormhole into a fleeting romance told in a mind-bending first-person chorus.

"Time Zone J is Julie Doucet’s first inked comic since she famously quit in the nineties after an exhausting career in an industry that, at the time, made little room for women.

The year is 1989 and twenty-three-year-old Doucet is flying to France to meet with a soldier. He’s a man she only knows through their mail correspondence, a common enough reality of the zine era, when comics were mailed from cartoonist to reader and close relationships were formed. Time is not on their side - the soldier is just on furlough for a few days - but the two make the most of their visit and discuss future plans, maybe even Christmas in Doucet’s city, Montreal.

Based on diary entries from the whirlwind romance, the passion and high emotions of youth - before you know the limits of love, before you know the difference between love and lust - seep through the pages. In contrast to the tryst, Doucet draws herself today, at fifty-five.

After years of being in a crowd of men, Doucet compulsively returns to drawing, creating an alternate universe that foregrounds women. The pages of Time Zone J overflow with images pulled from past and present, faces and people that have inspired Doucet across more than three decades of creative work."

Log in to get emails when Julie Doucet has something new.