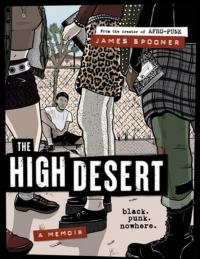 A formative coming-of-age graphic memoir by the creator of Afro-punk: a young man’s immersive reckoning with identity, racism, clumsy teen love and belonging in an isolated California desert, and a search for salvation and community through punk.

Teenage James Spooner hates that he and his mom are back in town after years away. The one silver lining -- new school, new you, right? But the few Black kids at school seem to be gangbanging, and the other kids fall on a spectrum of microagressors to future Neo-Nazis. Mixed race, acutely aware of his Blackness, James doesn't know where he fits until he meets Ty, a young Black punk who introduces him to the school outsiders -- skaters, unhappy young rebels, caught up in the punk groundswell sweeping the country.

A haircut, a few Sex Pistols, Misfits and Black Flag records later: suddenly, James has friends, romantic prospects, and knows the difference between a bass and a guitar. But this desolate landscape hides brutal, building undercurrents: a classmate overdoses, a friend must prove himself to his white supremacist brother and the local Aryan brotherhood through a show of violence. Everything and everyone are set to collide at one of the year's biggest shows in town...Weaving in the Black roots of punk rock and a vivid interlude in the thriving eighties DIY and punk scene in New York's East Village, this is the memoir of a budding punk, artist, and activist. End scene: Punk rock, forever.

Log in to get emails when James Spooner has something new.