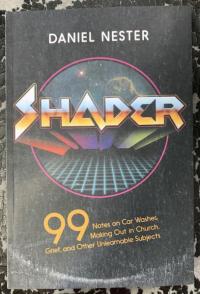 Shader: 99 Notes on Car Washes, Making Out in Church, Grief, and Other Unlearnable Subjects

Published by 99: The Press

In 2013, Daniel Nester’s estranged father died penniless and alone in a small apartment in Tucson. The news brought back a flood of memories about Mike Nester, an enigmatic truck driver with a genius IQ, who influenced Daniel’s worldview with conspiracy theories, philosophy books, and something called “The Nester Curse.”

Told in short chapters, Shader: 99 Notes on Car Washes, Making Out in Church, Grief, and Other Unlearnable Subjects is a semi-comic coming-of-age story of a music-obsessed Catholic boy who searches for a new identity outside of Maple Shade, N.J., a blue-collar town straight out of a Bruce Springsteen song and where Martin Luther King, Jr. was once thrown out of a bar at gunpoint. The town’s rough-and-tumble inhabitants, called Shaders, don’t suffer record nerds like Daniel gladly, and eventually punk rock and poetry saves his life.

A story of redemption and working through grief, Shader tells the story of what it means to leave a place that never leaves you.

Log in to get emails when Daniel Nester has something new.

Last Night at the Casino vol 1