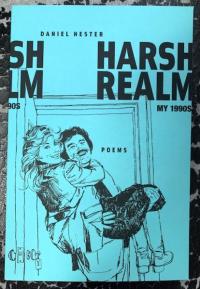 “All I’ve ever done is sing along,” writes Daniel Nester in Harsh Realm. Equal parts music ethnography, punk protest, and homage to the New York School, this ingenious collection takes us on a rollicking tour of the “layered decade” of the 90s to present day with poems that refuse nostalgia and ironic detachment to deliver up the real miracle: an anthem with the power to save. -Virginia Konchan

Daniel Nester’s Harsh Realm is a mixtape of poems weirdly paired with songs of the time, like playing TLC's "Waterfalls" on repeat while waiting for the results of his first AIDS test. Nester describes with love the shifting trends in 90s music, and exploring that emerging sense of self, part young poser, part earnest observer of the New York City poetry punk scenes. From the fall of the Berlin Wall to an Irish bar in the West Village, Nester details with humor and vulnerability his own emergence into adulthood. Word to your mother. -Tracey Knapp

Daniel Nester's Harsh Realm is a masterpiece of poetic time travel that lets us breathe differently, breathe into a time that has no beginning or middle or end; time that is an orb of music and emotion and language and heartbeat and that comes out of an unquenchable desire to love. Daniel Nester is working at his highest poetic powers in these poems. -Matthew Lippman (from the foreword)

Shader: 99 Notes on Car Washes, Making Out in Church, Grief, and Other Unlearnable Subjects

Log in to get emails when Daniel Nester has something new.