Home / Store / Books / Denim and Leather: The Rise and Fall of the NWOBHM 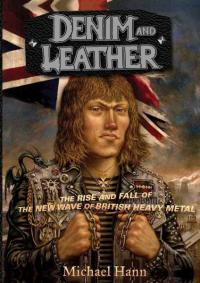 Denim and Leather: The Rise and Fall of the NWOBHM

The first top-down, snout-to-tail oral history of the NWOBHM.

An UNCUT Music Book of the Year 2022:”Evocative…Hann strikes gold”

THE GUARDIAN Best Music Books of 2022: “Deserves to be considered definitive”

TIMES OF LONDON Best Rock and Pop Music Books of 2022: “A treasure trove of crazy ideas, thwarted dreams, charismatic figures, and near triumphs…”

The ultimate first-hand document of the British explosion that first defined heavy metal for America.

“Denim and Leather captures a moment in time and a genre of music that had a brief moment in the sun. The book is an honest portrayal, directly from the horse’s mouth. The interesting thing is that it was people trying to discover their own identities, and  the book sums it up by the people who experienced it.” -Phil Collen, Def Leppard

Between 1978 and 1983, Great Britain spawned a DIY uprising of over 500 heavy metal bands. Many soon became the household names of the 1980s metal invasion…many others did not. For the first time, author Michael Hann captures the whole nose-to-tail story of the New Wave of British Heavy Metal in all its power and glory, exploring the bands, clubs, radio, magazines, festivals, and the majesty and misfires of the NWOBHM in over 100 interviews with members of Venom, Def Leppard, Iron Maiden, Diamond Head, Angel Witch, Samson, UFO, Tygers of Pan Tang, Vardis, Judas Priest, Saxon, Whitesnake, Girlschool, Witchfynde, Demon, Thin Lizzy, Rainbow, Gillan, Led Zeppelin, and more.

“Heavy metal fans will find much to enjoy.” -Independent

“Entertaining and informative… In an extraordinary feat of structural engineering, Denim and Leather corrals the contributions of more than a hundred interviewees into a cohesive story of a movement that was at best disunified. The book is often funny, and even ribald. It is to Michael Hann’s credit that [a] sense of poignancy…permeates almost every page. There’s more than enough here to make this exhaustive labor of love the equal of other standard-bearing oral histories such as Everyone Loves Our Town and Please Kill Me.” -Kerrang!

“Finally, a book about one of the most overlooked and unfairly derided movements in music history. There is so much in here, metal music that shaped everything that came afterwards, joy, pathos, humour and darkness. I learned so much; now excuse me while I go brush up on Witchfynde.” -Frank Turner

“An exhaustively researched and entertaining book full of new interviews with most of the key players, offering genuine insights into a movement that changed the face of rock for the better.” -Louder Than War

“An exhaustively researched and entertaining book full of new interviews with most of the key players, offering genuine insights into a movement that changed the face of rock for the better.” -Louder Than War

“Through interviews Hann presents a very comprehensive overview of the era. The amount of detail is incredible. The overall story is very familiar, stories about the various pubs, newsletters, magazines, radio shows, demo tapes, and quirky personalities that were a part of the early development of the scene. It was an exciting time and the stories provided by the people who were they, first hand, adds extra vibrancy and life to these tales.” -Metal-Rules.com

“Succeeds brilliantly in demonstrating why the NWOBHM is historically interesting. And the book also does something special: it makes the NWOBHM lovable.”  -The Quietus

*WE HAVE TO CHARGE TAX IF YOU'RE IN ILLINOIS. OUR WEBSITE ISN'T SET UP TO DO IT. APOLOGIES. IT IS 10.25%, WHICH ON THIS BOOK IS $3.06. ALSO, IT IS BIGGER THAN WHAT WE WOULD NORMALLY SEND SOMETHIG OF THIS PRICE IN. IF IT WILL COST MORE THAN THE PRICE QUOTED TO YOU ON OUR WEBSITE WE WILL CONTACT YOU. THANK YOU!

Log in to get emails when Michael Hann has something new.