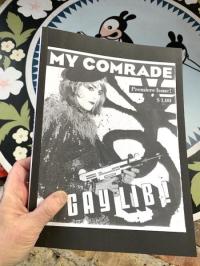 My Comrade was an underground gay culture zine that set itself apart from the deluge of Xeroxed zines popping up in New York in the late 1980s and early 1990s. Through parody of both mainstream tabloid magazines and the self-serious gay press, a campy and ironic sensibility, and radical left sympathies and sloganeering, My Comrade captured the zeitgeist of the gay downtown scene.

Publishing 11 issues between 1987 and 1994, and three issues since, My Comrade documents the last years of underground gay culture before marriage equality and representation at elite levels of American society became the primary drivers of gay politics and aesthetic production. My Comrade was briefly revived from 2004 to 2006, and again on the occasion of the exhibition “My Comrade Magazine: Happy 35th Gay Anniversary” at Howl! in 2022.

The My Comrade Anthology collects pages from past issues of My Comrade selected by Linda Simpson.

Log in to get emails when Linda Simpson has something new.