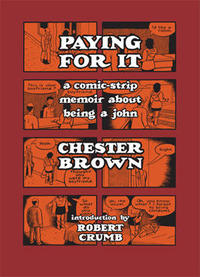 Paying For It A Comic Strip Memoir About Being a John

Chester Brown did a pretty great thing with this book, one of the most anticipated graphic novels pretty much ever. I think it's about time more johns speak out publicly about their involvement and investment in sex economies. In Paying For It, Brown presents an especially crisp libertarian-flavor case in favor of decriminalized sex work. There's also sort of a nice journey of personal growth in here too where, through the course of the book, he goes from completely trashing and dismissing the idea of "romantic love" to finding his own weird and wonderful variation of it (thanks to his john-dom).

Here in Chicago, aldermen are currently trying to get batshit-crazy anti-prostitution laws on the books, so, you know, speaking up about the destigmatizing and decriminalizing of sex work truly matters. Brown's frank and shame-free stance is loud and clear and his cartooning style is built primarily around building his case.

At times, the dialogue gets so loaded it's almost polemic but the characters are all fleshed out enough that it sways more toward Fun Home-style self-analytical autobio. Also, there's this tricky issue where he draws all the women he pays with the same faceless anonymity. Initially, this seemed troublesome, but I think that here Brown is showing us physical anonymity while letting the dialogue convey some of the subtler levels of involvement that make each of his encounters unique. When I think of great writing and art by sex workers, johns are often afforded a similar style of anonymity, making Brown's approach just seem like common courtesy from the other side of the coin.

Okay, so time to quit reading all the reviews and give the actual book a try. -EF

Log in to get emails when Chester Brown has something new.