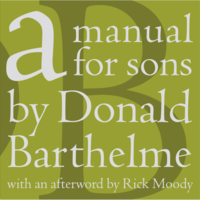 "‘A Manual for Sons’ was first published as a short story in The New Yorker magazine, a few months before its appearance in the novel The Dead Father as a book within the book, mysteriously given to the main characters, who read it and then cast it into a fire; six years later, Donald Barthelme excised it again for inclusion in the compendium Sixty Stories. The story is presented here in its primitve form, as it occured to the sons and daughters of The Dead Father — a little booklet, translated from the English, suitable for casting into fires or elsewhere. Novelist Rick Moody contributes an afterword."

Log in to get emails when Donald Barthelme has something new.