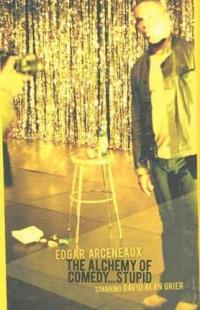 Edgar Arceneaux: The Alchemy of Comedy . . . Stupid documents a multi-channel installation by contemporary video artist Edgar Arceneaux. Centered on video footage of popular comedian David Alan Grier, the artwork examines the nuances and structures of comedy routines, jokes, and humor itself. Arceneaux shot footage of Grier over the course of a week performing at three sites in Chicago; the resulting artwork calls into question the relationship between performer and audience, comedy and comedian, and laughter and pathos. Alongside stills from the video, the book presents facsimile reproductions of pages from a notebook kept by Arceneaux during the production of the work, as well as transcripts of some of Grier's routines; together, the materials offer a revealing look into the formative processes of both comedy and art.

Log in to get emails when Edgar Arceneaux has something new.

What Problems Can Artist Publishers Solve?

by PrintRoom and Temporary Services