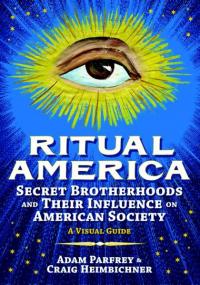 Ritual America: Secret Brotherhoods and Their Influence on American Society: A Visual Guide

by Craig Heimbichner and Adam Parfrey

In the early twentieth century, as many as one-third of America belonged to a secret society. And though fezzes and tiny car parades are almost a thing of the past, the Gnostic beliefs of Masonic orders are now so much a part of the American mind that the surrounding pomp and circumstance has become faintly unnecessary. The authors of Ritual America contextualize hundreds of rare and many never-before printed images with entertaining and far-reaching commentary, making an esoteric subject provocative, exciting, and approachable.