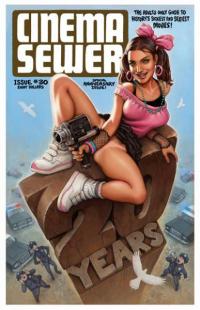 From the words of the publisher himself, Robin Bougie: "Well, this is it! The culmination of 20 years of hard work! Issue thirty of Cinema Sewer magazine! YAY! Here's to another 20 years (hopefully!) When I started CS at the age of 23, I had no idea what was to come, and it certainly wasn't anything meant to be permanent. It was just yet another mini-comic series, of which I had done dozens of previously. How time flies, and look at how this sleazy little zine has grown...So, let's have a look at what's in this special oversized anniversary issue -- the biggest ever issue of CS clocking in at 60 all-new pages! The cover is by Ben Newman -- don't worry folks -- she's 20! It even says right there under her young buttcheeks! ^_^ There are interviews with adult star Porsche Lynn, and Keith Prince (the son of AVON films smut legend Phil Prince), and there are dozens of reviews, articles, and comics about vintage cult cinema! Just a few of the films covered are: The Howling, Freeway, A Gun For Jennifer, Super Lady Cop, Whore, Human Condom Woman, Attack of The Beast Creatures, The Running Man, Blood Of Heroes, Star Crash, The Muthers, and the Playboy Roller Disco and Pajama Party TV special!  To top it all off, since this is a very special issue, I've done a FULL COLOR over-sized pull-out poster that comes with every issue, which features all the covers from all 30 issues! Hot diggity doggies!"

Log in to get emails when Robin Bougie has something new.