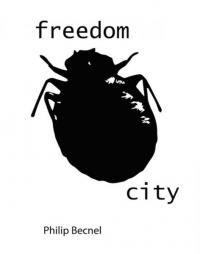 In his debut novel FREEDOM CITY, Philip Becnel hilariously ridicules the current kakistocracy (government run by the worst people) in a gripping satire that pays homage to The Monkey Wrench Gang. After President Trump unceremoniously dies from a stroke, an eclectic band of rebels from Washington, D.C. sever the heads of Confederate statues and wage a comedic guerrilla war on post-Trump America.

Log in to get emails when Philip Becnel has something new.