Home / Store / Books / Texas Is the Reason: The Mavericks of Lone Star Punk 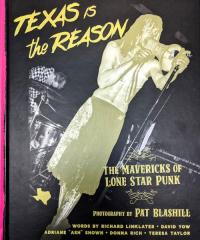 Texas Is the Reason: The Mavericks of Lone Star Punk

Arriving in 1978, hitched to the back of the Sex Pistols tour bus, punk soon became as mythic in Texas as the state’s devotion to football, cattle, and prayer. Confrontational renegades like the Huns, the Big Boys, and the Dicks led a defiant new era of blood, sweat, and cross-dressing cowboys. Austin son Pat Blashill grabbed a camera and began shooting local punk bands, uncovering a story of desperation and creative deliverance, set in trailer parks, low-rent shared living, and wild, Texas bucket-of-beer bars.

Log in to get emails when Pat Blashill has something new.