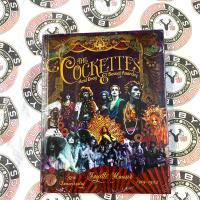 The influence of the Cockettes on American underground culture is present in every glittery sequin and candy-colored coiffure gracing our daily lives. Birthed in an LSD bathed commune in San Francisco’s Haight-Ashbury district in the summer of 1969, The Cockettes were a fever dream of sexual freedom and expression. They granted themselves names and identities that reflected their inner wild selves then put it all on the stage with elaborate costumes in anarchic musical productions. Gay, straight, bisexual, pansexual...The Cockettes were everything. The photos here are shared from museums, magazines, and the private collection of founding and long-time Cockette, Fayette Hauser. Her memories of the people, places, and outfits are the only documents from a living member of this vital art collective.

Log in to get emails when Fayette Hauser has something new.