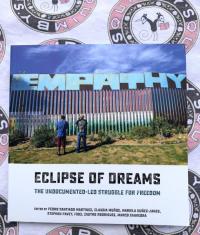 Eclipse of Dreams: The Undocumented-Led Struggle for Freedom

After the DREAM Act failed, many young undocumented activists understood that pinning their hopes on a piece of legislation had been a bad idea. They also saw that the DREAM Act would have fragmented communities, families, and social movements, because it designated only a subset of immigrants as worthy of assimilation (and its rewards), while others, who often lived under the same roof, would be further criminalized. Eclipse of Dreams creatively tells the stories of a new generation of young people, awakened “Dreamers” who see the injustice built into the American dream. Using a collective writing process, as well as testimonials, photography, poetry, and art, this book is an invitation to reconsider the myths we tell ourselves, in order to find another way forward for migrant justice and human dignity, one that might allow us all to recover our global humanity. From direct action to the infiltration of immigrant detention centers, these youth are leading a movement for human liberation.