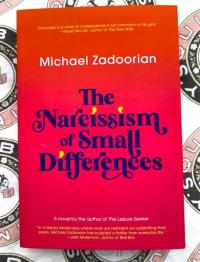 Joe Keen and Ana Urbanek have been a couple for a long time, with all the requisite lulls and temptations, yet they remain unmarried and without children, contrary to their Midwestern values (and parents' wishes). Now on the cusp of forty, they are both working at jobs that they're not even sure they believe in anymore, but with significantly varying returns. Ana is successful, Joe is floundering--both in limbo, caught somewhere between mainstream and alternative culture, sincerity and irony, achievement and arrested development. Set against the backdrop of bottomed-out 2009 Detroit, a once-great American city now in transition, part decaying and part striving to be reborn, The Narcissism of Small Differences is the story of an aging creative class, doomed to ask the questions: Is it possible to outgrow irony? Does not having children make you one? Is there even such a thing as selling out anymore? More than a comedy of manners, The Narcissism of Small Differences is a comedy of compromise: the financial compromises we make to feed ourselves; the moral compromises that justify our questionable actions; the everyday compromises we all make just to survive in the world. Yet it's also about the consequences of those compromises, and the people we become because of them, in our quest for a life that is our own and no one else's.

Log in to get emails when Michael Zadoorian has something new.