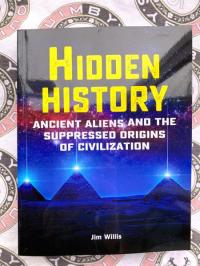 Hidden History: Ancient Aliens and the Suppressed Origins of Civilization

“History” also refers to the written past, while prehistory refers to events before writing was introduced. A “historian” is an expert in and student and interpreter of the events of the past. Yet, history is simply an interpretation and understanding of the written record, ancient artifacts, folklore, and the latest scientific findings, but what if the historians and the “experts” have it wrong? Exploring alternative theories on the establishment of society and civilization, Hidden History: Ancient Aliens and the Suppressed Origins of Civilization looks at a variety of dissenting, suppressed, and forbidden accounts of history and the origins of humanity. This fascinating dissection of the scientific findings, ancient artifacts, folklore, myths, and historical records explores our collective beginnings and the true nature of humanity’s beginnings. Along the way, it delves into: The origins of the cosmos, the Big Bang, and alien influences, the emergence of life, first humans, human settlements and migration, and conflicting timelines, the earliest civilizations, Nazca lines, Stonehenge, Göbekli Tepe, Egyptian pyramids, the megaliths that dot landscapes around the world, and the anomalies in the DNA and artifact records, the first people to come to North America, the legends, mythologies, and folklore from the earliest written texts of 10,000 years ago.

Serving as a useful introduction into the suppressed accounts of the origins of modern civilization, Hidden History combines cutting-edge science with metaphysical, spiritual, and even paranormal views, daring to ask whether there might be a better explanation for humanity’s existence and the origins of civilization than the current scientific consensus. This fascinating read takes a broad and inclusive survey of historical documents, various theories, and a wide array of perspectives to explore what conventional wisdom might have gotten right and wrong.

Log in to get emails when William Willis has something new.