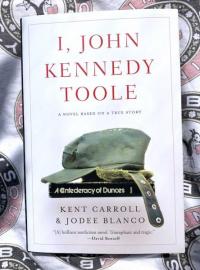 I, John Kennedy Toole: A Novel

by Jodee Blanco and Kent Carroll

The story behind John Kennedy Toole’s groundbreaking A Confederacy of Dunces, how it was discovered, championed, and published, is as engaging and colorful as the novel itself. I, John Kennedy Toole is the novelized true story of the funny, tragic, riveting narrative behind the making of an American masterpiece. The novel traces Toole’s life in New Orleans through his adolescence, his stay at Columbia University in New York, his attempts to escape the burden of his demanding mother and his weak father, his retreat into a world of his own creation, and finally the invention of astonishing characters that came to living reality for both readers (and the author himself) in his prize-winning A Confederacy of Dunces. The other fascinating (and mostly unknown) part of the story is how after a decade of rebuke and dismissal the novel came to a brilliant author, Walker Percy, and a young publisher, Kent Carroll, who separately rescued the book, then published it with verve and devotion. The novel that almost never came to be went on to win a Pulitzer Prize and continues to sell at a satisfying rate as it winds its way to the 2 million mark. That audience is the happy ending for this brilliant, unrepentant writer, whose only reward before his untimely death was his unending belief in his work and his characters.