Home / Store / Books / Resist Everything Except Temptation: The Anarchist Philosophy of Oscar Wilde 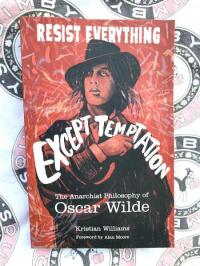 Resist Everything Except Temptation: The Anarchist Philosophy of Oscar Wilde

Oscar Wilde is remembered as a wit and a dandy, as a gay martyr, and as a brilliant writer, but his philosophical depth and political radicalism are often forgotten. Resist Everything Except Temptation locates Wilde in the tradition of left-wing anarchism, and argues that only when we take his politics seriously can we begin to understand the man, his life, and his work. Drawing from literary, historical, and biographical evidence, including archival research, the book outlines the philosophical influences and political implications of Wilde's ideas on art, sex, morality, violence, and above all, individualism. Williams raises questions about the relationships between culture and politics, between utopian aspirations and practical programs, and between individualism, group identity, and class struggle. The resulting volume represents, not merely a historical curiosity, but a contribution to current debates within political theory and a salvo in the broader culture wars.

Log in to get emails when Kristian Williams has something new.