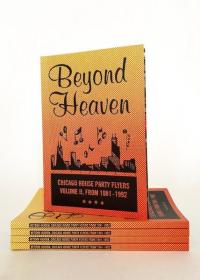 by Brandon Johnson and Mario “Liv It Up” Luna

With the original volume of Beyond Heaven (1983-89) out of stock we were at a crossroads. But luck was on our side when Mario “Liv It Up” Luna dug up a long-forgotten cache of material, and from that we bring you Beyond Heaven: Volume II. Same format but with all new flyers documenting an extended window of history, from early “mobile discos” that reflect roots of the underground movement before the term “house” was even coined, to the emergence of a new generation of house DJs and artists in Chicago inspired by the pioneers of the genre. As with the original, this book reflects a mix of figures and parallel movements that were entangled with the world of house. From dance groups to party crews, alongside promoters, labels, and record stores, both well established and lesser known, all are points of departure to good memories and/or further investigations into one of the greatest eras in the history of Chicago music, with a legacy that is profoundly influential to this day.

More by Brandon Johnson and Mario “Liv It Up” Luna