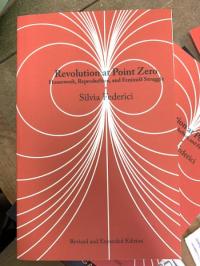 Written between 1974 and 2016, Revolution at Point Zero collects four decades of research and theorizing on the nature of housework, social reproduction, and women’s struggles on this terrain, to escape it, to better its conditions, to reconstruct it in ways that provide an alternative to capitalist relations. Indeed, as Federici reveals, behind the capitalist organization of work and the contradictions inherent in “alienated labor” is an explosive ground zero for revolutionary practice upon which are decided the daily realities of our collective reproduction. Beginning with Federici’s organizational work in the Wages for Housework movement, the essays collected here unravel the power and politics of wide but related issues including the international restructuring of reproductive work and its effects on the sexual division of labor, the globalization of care work and sex work, the crisis of elder care, the development of affective labor, and the politics of the commons. This revised and expanded edition includes three additional essays and a new preface by the author.

Log in to get emails when Silvia Federici has something new.