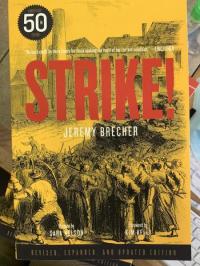 Involving nationwide general strikes, the seizure of vast industrial establishments, nonviolent direct action on a massive scale, and armed battles with artillery and tanks, this exciting hidden history is told from the point of view of the rank-and-file workers who lived it. This fiftieth anniversary edition brings the story up to date with chapters covering the "mini-revolts of the 21st century," including Occupy Wall Street and the Fight for Fifteen, and concludes by examining a wide range of current struggles, ranging from #BlackLivesMatter to the global "Student Strike for Climate" that may be harbingers of mass strikes to come. This revised, expanded, and updated edition includes a preface by Sara Nelson and a foreword by Kim Kelly.

Log in to get emails when Jeremy Brecher has something new.