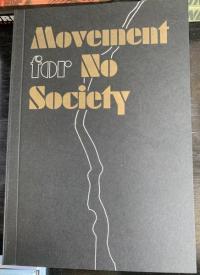 Movement For No Society

As per the publisher: Attempts to attack the socioeconomic order in Philadelphia today inevitably come up against a vast landscape of activists and formal organizations that channel any resistance into preexisting formulas. Pacifist ideals and reformist strategies have long held sway over the radical imagination. Insurrectionary activity is willfully misunderstood, and its historical legacy largely forgotten. One of the ways we have tried to break this hold is through a series of talks called “Movement for No Society.” In these talks we explored some of the historical conditions for our situation and attempted to recover more interesting insurgent possibilities and their paths through Philadelphia’s history. Our research for these talks eventually became this book. Inside: the Quaker art of genocide, anarchist bombings in Philly, the street-fighting strategies of a little-known Black Liberation group from Philly, and a critical autopsy of the Movement for a New Society, as well as what direct struggle is, why to talk about attack, and how to destroy it yourself.

Log in to get emails when Contagion Press has something new.