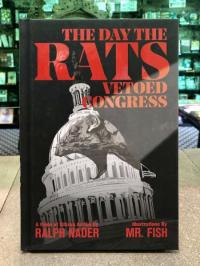 by Mr. Fish and Ralph Nader

In this heavily illustrated fable written by the influential public advocate, rats invade Congress ― and the citizens revolt!

When a reporter breaks the news that "Rats have invaded the toilet bowls" of the halls of Congress, it sparks a national frenzy. Activists see the rats upending "business as usual," and turn the invasion into a symbol against the lobbyists who hold Congress in their sway. A massive citizen uprising follows, which threatens to sweep Congress clean of Wall Street’s chokehold of corruption ― but the corporate titans have ways of fighting back! Gleefully and generously illustrated by famed political cartoonist Mr. Fish, and more than just a story, this is a "how to" guide to effect political change ― from a pied piper who’s done it time and time again. Prose with illustrations.