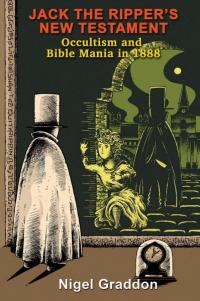 Jack the Ripper’s New Testament: Occultism and Bible Mania in 1888

This book offers evidence, for the first time, that those responsible for the Whitechapel murders were members of a hit team associated with a centuries-old European occult confederacy dedicated to human sacrifice. This was first mooted by Jim Keith in his 1993 book Secret and Suppressed, and then corroborated in the private papers of a Monsignor who carried out intelligence work for Pope Pius X in the run-up to the outbreak of global conflict in 1914. The priest told of the existence of a Vatican-based cabal of assassins (known to its members by the maxim “Dead Men Carry No Tales”) formed by the infamous Borgias that is in alliance with a Teuton occult group formed in the 9th century. It was from within this unholy alliance that assassins travelled to London to carry out the Ripper murders to “solve a sticky problem for the British Royal Family” (Keith’s Vatican informant). Part of the substantiation for this evidence derives from Joseph Farrell in his recent Hess and the Penguins book for AUP. The evidence also substantiates Keith’s informant’s astonishing claim that the assassins came together in a conference in Basle in 1897 to put the building blocks together for National Socialism and to prepare the blueprint for the Holocaust. For the first time also, the book substantiates a new line of research that suggests that the work of key figures from America and Britain within the nineteenth-century’s highly influential and richly funded Bible Revision movement was associated with the grisly events in London’s East End during 1888’s Autumn of Terror. Chapters include: “Mr. Splitfoot”; Whitechapel; Martha; HPB; “Polly”; The Occult Underground; “Dark Annie”; The Occult Establishment; “Long Liz”; The Lady with the Lilacs; From Lilacs to Violet, Mary Kelly; Baconalia; “Rothschild’s” Bible; Basle, 1897; Through the Looking Glass; more.

Log in to get emails when Nigel Graddon has something new.