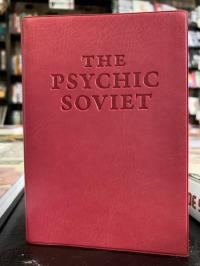 This reissue of Ian F. Svenonius’s cult-classic debut essay collection, includes brand-new writing in this new expanded edition. One of the mainstays of the Washington, DC, underground rock and roll scene, The Psychic Soviet is Ian F. Svenonius’s groundbreaking first book of writings. The selections are written in a lettered yet engaging style, filled with parody and biting humor that subvert capitalist culture, and cover such topics as the ascent of the DJ as a star, the “cosmic depression” that followed the defeat of the USSR, how Seinfeld caused the bankruptcy of modern pop culture, and the status of rock and roll as a religion. The pocket-sized book is bound with a durable bright-pink plastic cover, recalling the aesthetics of Mao’s Little Red Book, and perfect for carrying into the fray of street battle, classroom, or lunch-counter argument.

"In a sense the book is Mr. Svenonius's love letter to the good old days of do-it-yourself punk concerts, though it's cleverly disguised as a series of Marxian essays." -New York Times

"The pocket-sized book--given Svenonius's communism infatuation, the parallel to Mao's Little Red Book is no mistake--contains well-thought-out arguments on a variety of subjects, from vampires to the origins of punk rock. It's often funny, but never in a self-consciously ironic way." -Washington Post

"Ian Svenonius has come a long way since Sassy Magazine first dubbed him the 'Sassiest Boy in America' in 1991. The DC singer has never been anything less than political to the extreme." -Village Voice

Log in to get emails when Ian F. Svenonius has something new.

Ode to My IUD