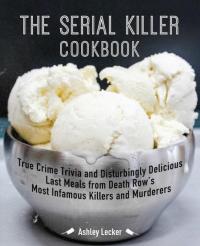 Bring your love of true crime into the kitchen with meals ranging from the bizarre (a single unpitted black olive) to the gluttonous (a dozen deep-fried shrimp, a bucket of fried chicken, French fries, and a pound of strawberries), inspired by Ted Bundy, John Wayne Gacy, and other notorious death row inmates.

The perfect gift for murderinos and true crime fans, The Serial Killer Cookbook: Last Meals pairs serial killer trivia with the recipes of the meals these killers ate during their final hours. With full-color photos, chilling true crime facts, and easy-to-follow steps, you’ll be cooking up killer meals in no time. This collection of recipes is both delicious and surprising, and spans breakfast staples to indulgent desserts, including:

Seared Steak, Hash Browns, Toast, and Fried Eggs (given to but not eaten by Ted Bundy, serial killer)

Log in to get emails when Ashley Lecker has something new.