Home / Store / Books / Sword of Whatever: Stories and Artwork For and Inspired By Payton Leonard 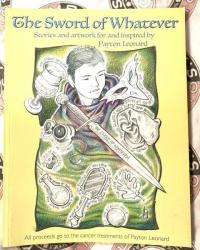 Sword of Whatever: Stories and Artwork For and Inspired By Payton Leonard

As per the publisher: Payton Leonard has Leukemia. Several months before Payton was diagnosed, he and his Aunty M were discussing (as they often did) what books they were currently reading. Payton reported his book as "The Sword of.... Whatever." He went on to explain that was not ACTUALLY the title of the book, he had just forgotten the real title. His Aunty M and Uncle K both joked that they would love to read a book titled "The Sword of Whatever," and among them the three began to brainstorm other titles that might be in the same series. "The Shield of Meh," "The Army of Guys Who Weren't Doing Anything Anyway," and so on. Aunty M kept a running list of the titles and they often added to it-- brainstorming in person, sending ideas via text message. Sometimes one of them would start an idea (The Goblet of...) and let another finish it (... Gulp!). When Payton received his Dire Diagnosis, Aunty M decided she wanted to make him something special, so she reached out to artists, authors, and other creative-types with the list of titles. She asked them to spend 10min to an hour to create something based on a title. The results are a delightful mix of materials. Covers for books that haven't been written yet. Posters for movies not yet made. Cartoons and comic strips, oil paintings and short stories, poetry and a few things in a category all their own. The book is made for the reader to interact with. There are coloring pages and story prompts, places to draw and ideas to ponder. All proceeds from sales go to fund Payton's leukemia care.

Log in to get emails when Emily Leonard has something new.