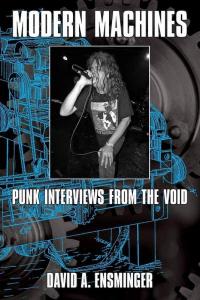 Published by Left of the Dial Books

Modern Machines: Punk Interviews From The Void features conversations with noted countercultural underground music icons by author, photographer, and drummer David A. Ensminger, who has written for Houston Press, Popmatters, Maximum Rocknroll, Razorcake, the Univ. Press of Mississippi, the Univ. of Texas Press, and more. This volume contains some material previously published in the rare and obscure zine Left of the Dial, like John Brannon from Negative Approach, interviews that were previously only available on-line, such as ones with members of The Crowd, Descendents, Beatnigs, Membranes, Units, JFA, and Guitar Wolf, as well as with Bob Suren and Victor Gastelum (SSt Records designer), and a handful of brand new interviews from 2020, such as Al Quint of Suburban Voice, Chip Kinman of the Dils/Rank and File, and Dave Dictor of MDC, that have never been shared with the public until now. Plus, it reprints his interview with Eugene Robinson of Oxbow as well. Plus, the text features rare photographs of JFA and the Adolescents by camera legend Ed Colver as well as numerous vivid, historical, and evocative photographs, posters, and flyers. For those seeking in-depth, detail-oriented, and wide-ranging interviews that show the scope, intelligence, and singular power of the hardcore and punk era, this is an indispensable addition to your collection.

Log in to get emails when David Ensminger has something new.