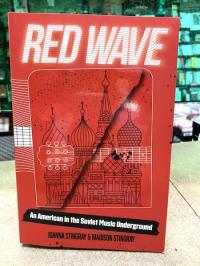 Red Wave: An American in the Soviet Music Underground

by Joanna Stingray and Madison Stingray

When Joanna Stingray’s New Wave music career stalled after a Studio 54 performance and record release, she traveled to Russia in 1983 with the name of one musician to meet if she could sneak off her state-sanctioned tour. That fateful, shadowy encounter with the now-legendary Boris Grebenshchikov opened “the rabbit hole” for her tumble into Soviet underground culture and a decades-long devotion to Russian rock, as well as her own spectacular rise to fame in that country. Called “the American tractor” by artists and musicians for whom she smuggled guitars, equipment, Americana, and art supplies into the U.S.S.R.; and out to the West, their music and art, Joanna Stingray is credited by Russians for helping pave the way to the cultural opening that collapsed state control. An apogeal event was the U.S. release of the double album produced by Stingray, “Red Wave: Four Underground Bands from the Soviet Union.” Months after the album appeared in the United States and started being trafficked on the Soviet black market, Mikhail Gorbachev decided the Red Wave bands should be allowed to become “official,” launching the bands to notoriety by 1987.